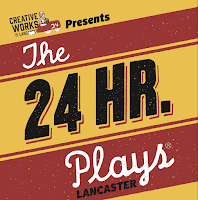 February 6, 2021 - Kimberly was invited to be one of six writers for Creative Works of Lancaster's upcoming 24 Hour Plays: Lancaster 2021. This is the tenth edition of this event, and this year's event will be held virtually. Live streaming content will begin at 6:00 p.m. on February 20, 2021 from the Creative Works YouTube channel. Performances of the plays will kick off at 7:00 p.m.

All joining virtually from different locations, six writers, six directors, thirty actors, and one production team will write, rehearse, and perform six short plays in a 24-hour period starting on Friday evening, February 19, when everyone meets for the first time. After an explanation of some ground rules and a lightning round of introductions and auditions, the actors and directors sign off, and writers stay online to choose actors for their pieces. The six writers work through the night to create brand new plays and hand off their work to directors early Saturday morning, February 20, the day of the performance. After negotiating for their choice of play, directors begin rehearsing with their actors. A crew of technicians and volunteers will be on hand to help them prepare for performances to go live on YouTube that evening.

Since its inception in New York City in 1995, The 24 Hour Plays (www.24hourplays.com) have been performed for audiences throughout the United States and the world – attracting both professional and amateur theater artists.

Creative Works utilizes a Pay What You Decide ticketing model with no fixed ticket prices. Ticket reservations, as well as opportunities to sponsor an artist or a portion of the event, are available at www.creativelancaster.org.